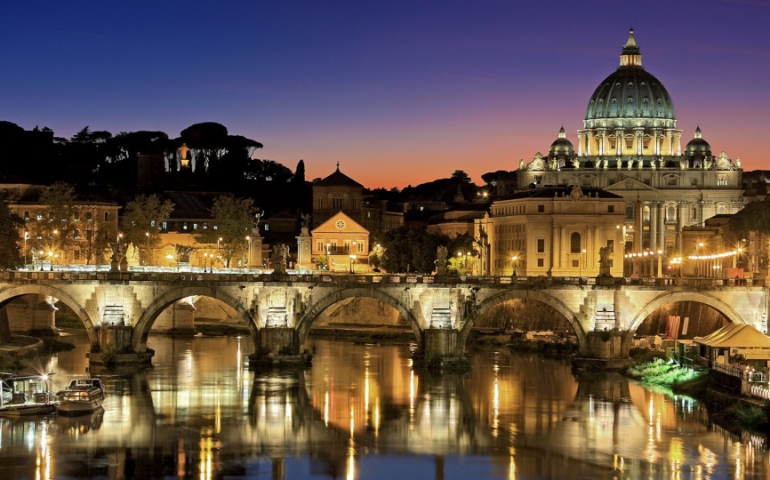 Everything in Rome is beatiful and magic!

The Eternal city leaves pleasant memories in the imagination of people.

It has been really difficult to decide what are the top 5 places to visit in Rome Italy.

In a single post, it is really impossible to include everything that you may see.

So this is not an absolute top list, but the places described in this guide are a personal preference and they are the ones that left me a sign during past years.

I have not included many important monuments and buildings, such as the Colosseum, St. Peter’s Square, People’s Square and many others: but obviously I had to make a choice.

At the end of this article you will find a personal itinerary through the places described below and that you will can watch on Google Maps, too.

Are you ready then to discrover the best places to visit in Rome during 2019?

1. Pantheon: In the heart of Ancient Rome

The Pantheon is one of the most famous monuments of ancient Rome and it is located in the district Pigna, in the middle of the historical center of the city.

It was foundend between the years 27-25 b.c. by Marco Vispanio Agrippa, and it was rebuilt between 120 and 124 a.d after the great fire of Rome.

It is considered one of the most important heritages of the Eternal City.

Since the VII century, it was converted into a Christian basilica, but originally it was used as a private building for sacred use, by Agrippa and not as a public temple.

This would explain why the original name and the function of the building have been lost.

After the great fire, the Pantheon was rebuilt under the emperor Adriano.

When you enter in Rotonda’s Square, you will be fashinated by the majesty of the Pantheon, a circular-shaped structure that stands on one of its sides and dominates the scene, with its dome and its columns in Corinthian style that accompany the visitor’s entrance.

You will probably be captured by the incision on the pediment, dedicated to Agrippa who quotes the following:

When you cross the pronaos, it is impossible not to feel engulfed, as part of a past, ancient civilization.

Inside, the light spreads from above, highlighting the niches that alternate inside, the colonnade and the apse on the bottom, details that at noon get their maximum prominence.

Curiosities around the Pantheon:

2. Janiculum: the 8th Hill of Rome

The Janiculum is considered one of the most beautiful places to admire Rome: although not part of the Seven Hills of Rome it is sometimes referred as the 8th Hill.

On the Hill we may find many buildings and monuments: “La Fontana di Acqua Paola“, a Baroque fountain built during Pope Paul V pontificate, in XVII century; the church San Pietro in Montorio, that guards the shrine “Il Tempietto”, built by Donato Bramante; Villa Lante al Gianicolo, built by Giulio Romano during the XVI century.

We may find here also some research institutes, like the American Academy in Rome and the Spanish Academy, and some Colleges and Universities like the Pontifical Urban University and many others.

The reason why the Janiculum became famous, is for its historical role during french invasion at the middle of XIX century, when Garibaldi and his troops, countered the invader.

On the Hill we may find many dedicated statues to the Italian patriot.

The Janiculum is an amazing place where walk and relax, far from the chaos of the City, with its gardens, and many activities for children, such as puppet shows and rides with ponies.

It is one of my favorite places where admire the landscape, the domes, and the majesty of the Eternal City.

It seems to be in another world, in another place, and it is easy to get lost in thought while you walk through the Botanical Garden, located at the slopes of the hill, or near its monuments and buildings.

It is a breath of fresh air in a city sometimes too chaotic, to let the traveler admire its beauty.

Curiosities around the Janiculum:

The janiculum is always opened, also during holidays.

Castel Sant’ Angelo is a monument built under the Emperor Hadrian, as a mausoleum for him and his family. During next years it was used by the popes as a castle and a fortress, and actually it is a museum.

Inside it, we may find the Urns Room, where the vestiges of the imperial family are preserved, but also many rooms used in ancient times as prisons, and the most famous of them was called Sammalò.

The actual name is due to the statues of Angels that we may find at the entrance. The main of them is on the top of the building and it was rebuilt many times during the years: the last version of it, dedicated to the archangel Michael, is in bronze and it was built by Peter Anton von Verschaffelt in the XVIII century.

In Rome there is this fake optical vision, in which you can see nearby, distant things, like the dome of San Pietro or Castel Sant’Angelo.

You may see the latter from the street “Via del Banco di Santo Spirito”, set like a frame, by the shores of the Sant’Angelo Bridge over the Tiber.

It is majestic, with its circular appearance, to push you to want to know its history.

In the evening, under the starry sky, with its faithful and punctual street performers, and with the lights that reflect on the pavement, full of memories, the Mausoleum can create the feeling of not being alone and being in love with the beauty of Rome.

Do not miss a sunset there.

It is one of the most famous and amazing Squares in Rome, and its name is due to the Spanish palace where it is placed the Iberian embassy.

Two elements stand out when you enter the square:

The first one is the fountain on the center, the famous “Fontana della Barcaccia”, built during the baroque epoque, by Pietro Bernini and his son Gian Lorenzo.

The second one is represented by the Spanish Steps, formerly the steps of Trinità dei Monti.

The steps were built under the cardinal De Tencin and inaugurated during the jubilee from pope Benedetto XIII in 1725.

Trinità dei Monti is, instead, a famous and important church of the Catholic Worship in Rome, and it was built in the first decade of XVI century .

A remarkable building on one of the sides of the square is the home of the english poet John Keats, actually used as a museum to his memory and the one of the poet P.B. Shelley.

Another important monument is the Palace of Propaganda Fine, property of the Holy See in Rome.

When you access the square “Piazza di Spagna” from Via Condotti, one of the most important streets in Rome, it is impossibile to not admire the magnificence of the Spanish steps, that take the visitor’s eyes towards the church of Trinità dei Monti.

And you will wish to run across its 136 steps, admiring from above the majesty of the Eternal City.

From Piazza di Spagna, you will be able to reach some of the main places of the city:
Piazza del Popolo, another famous square in Rome, on the north west side of it and the Trevi Fountain, on the south side.

It is easy to reach from Trinità dei Monti the important buildings Villa dei Medici and Villa Borghese, two of the most famous and amazing Villas in Rome.

Visiting these places, you will feel projected into the past, reliving the beauty of Rome.

It is another of the most important and famous squares in Rome, built from the family Pamphili: it is shaped like a stadium at the behest of pope Innocenzo X.

In ancient times it was a stadium built by the emperor Domiziano in the year 58, and for this reason it took the name of “Stadium of Domitian”.

The square, with its palaces and architectural elements is symbol of the baroque epoque in Rome: many of them were built by Gian Lorenzo Bernini, Francesco Borromini, Girolamo Rainaldi and Pietro da Cortona, some of the most important italian sculptors and architects, authors of many monuments in the city.

In the square there are three of the most beautiful fountains of Rome (Fontana del Moro, Fontana di Nettuno, Fontana dei Quattro Fiumi) and they are considered part of magnificence of the Late Roman Baroque.

When you enter the square, its charm invests and bewitches you.

Its fountains immediately affect your eyes, for their magnificence, for the precision with which every single detail has been carved.

When you turn around each of them, they seem to be looking at you, watching you as a judge would do with the guilty, reproachfully.

They are majestic and make you feel small.

One of the most beautiful moments in Piazza Navona is during the Christmas holidays: when stalls and markets flock it, together the tourists. And in the crowd, sometimes, you may find some mimes, motionless in the cold waiting for the fruits of their noble job.

Top 5 places to visit in Rome Italy: A possible Itinerary

The following section illustrates a possibile itinerary that will help you to visit the top 5 places to visit in Rome Italy described above.

The above map describes the ideal path on foot, to visit all the places described in this article. You may zoom in and out the map, click on the red pins to view detailed descriptions, watch the map in full screen or if you wish you may share it with your friends.

Piazza Navona is really near to the other side of the river, just walking inside its streets, but if you prefer you may follow the main roads Lungotevere Tor di Nona, along the coast, and turn right towards Giuseppe Zanardelli Street.

The Pantheon is far few minutes from the square, just be careful to the indications zooming in the map (you may print it if you wish!).

Piazza di Spagna is far from the other points and it will takes more minutes to reach the final destination, so my advice is to plan a stop along the road to take a break for lunch or a snack before continuing your walk.

Along the way you will find refreshment points, shops and other monuments and buildings that you can visit in total relaxation.

If you are arrived here, I feel very happy and I hope to have turned on your curiosity and desire to know and discover the Italy.

If you want to read more, you may be interested on my article “What are some good places to visit in Italy“.

This article, regardless the top 5 places to visit in Rome Italy, was written to make you inspired during your journey in the italian capital, maybe for you vacations during next 2019 summer. Why not?

Let me know leaving a comment! I would be glad 🙂

Are you looking for an amazing wallpaper for your smartphone?

Are you looking for an amazing wallpaper for you smartphone?

Download our FREE Italy wallpaper for you smartphone now!

This website uses cookies to improve your experience. We'll assume you're ok with this, but you can opt-out if you wish.Accept Read More